Purveyors of Hand-Crafted Knives and Accoutrements

There hasn't been a revolution in knife materials since it was discovered that adding excess carbon to iron produced steel. Sure, evolution has occurred but things really aren't that different than they were 200 years ago. Until now.

Well, over the past several years we've developed our patented SM-100™ material to be that exact material revolution. For practical purposes, there will now be three main classes of knife materials - steels, ceramics, and SM-100.

SM-100™ was originally developed for bearing and wear components for the United States Space Program, and it quickly became evident that we were onto something really important and relevant to the knife community. Along with lots of help from Duane Dwyer of Strider Knives fame, we worked tirelessly on prototypes and processing sequences to arrive at where we are today, which is the ability to provide you with one of the absolute best knife making materials. 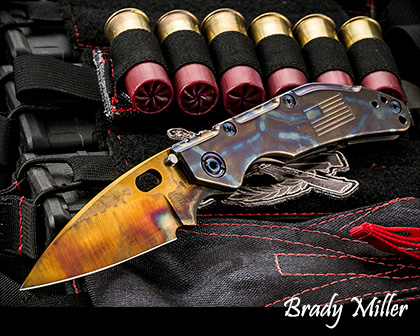 If you've ever wanted to use Titanium for a blade but couldn't because of Titanium's inability to hold an edge, SM-100 is what you've been waiting for. It is just as immune to corrosion, but can actually hold an edge.

So, what makes SM-100™ such a phenomenal knife material?

Well, for starters, it will never rust or corrode for you. In fact NASA publically calls it "Corrosion proof". And we're not talking about corrosion proof like stainless is supposed to be, we're talking about you can leave SM-100™ at the bottom of the ocean for 100 years and the knife will look as good as it did the day you dropped it overboard.

An important point to make here is that the high hardness that SM-100 achieves is through-thickness hardness; in other words there are no coatings to chip off or surface heat treatments to break through. 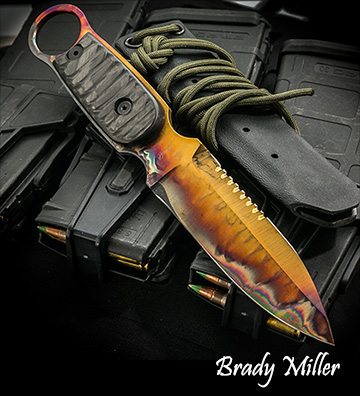 On top of the lower friction pointed out in the plot below, notice that the SM-100 has twice the life of the 440C (in bearing applications). The left of the plot shows some titanium results, which as expected do not wear well at all, but are of course quite corrosion resistant. So anytime you wish you could combine the corrosion resistance of titanium with superb wear resistance, call on SM-100. Now, we often get asked how all our bearing data relates to knives, well you'd have to ask our growing base of satisfied customers about that.

In addition to the inherent material properties that SM-100™ brings to the wear resistance discussion, our patented processing route also improves wear resistance by imparting a super-fine grain microstructure as seen in this micrograph. This type of microstructure ensures that the proper distribution of the all-important hardening phases is found along the entire length of the edge. 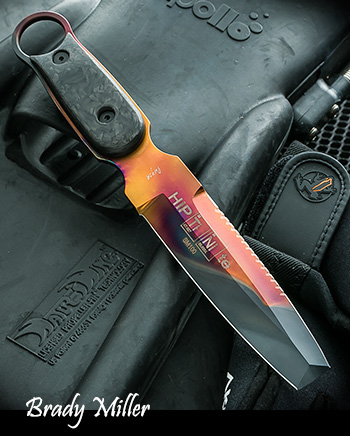 Another benefit of SM-100™ knives is the lower coefficient of friction when compared to steels.

This means easier cutting (less force required) and a cleaner and safer working environment in general - whether you're working in the kitchen or in the middle of the jungle.

SM-100™ is non-magnetic meaning that it can be used as field tools where ferrous metals pose a safety risk such as is the case with mine probes or ordnance tools.

An extremely unique feature of SM-100™ is the ability to electrolyticly color your knives with custom colors and patterns. We are still in the early stages of exploiting this feature, so expect to see more information here in the future.

NASA conducted common compression tests to determine at what load SM-100 would fail - only this time their machine couldn't go high enough to cause failure!

As you can see in the plot, once the initial load was relieved, the material strained about 1% and then took on a superelastic behavior. This has two major positive implications for the knife world: 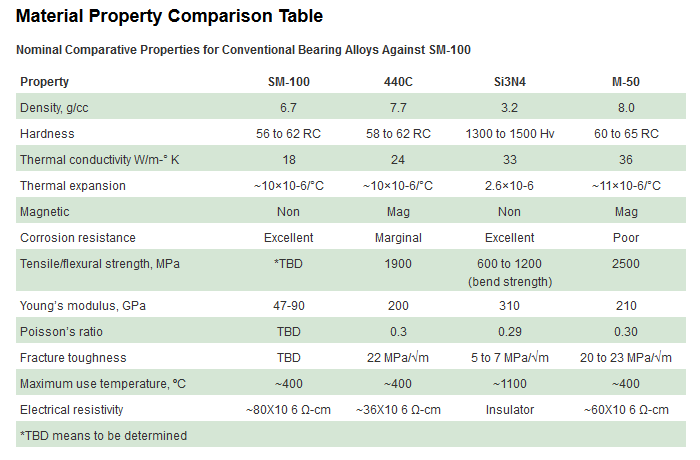 Begin by choosing from a wide variety of handle materials, then go on to select your favorite blade design and blade material.

Then check out and pay only a small initial depost to get started.
... Read More

Or, Visit an Online Dealer

Can't wait? Dwyer Custom has online dealers with a nice selection of knives that you can order now.
... Read More